Brexit and Multilingual Hiring: cause and effect

Europe is the proud owner of the largest single market in the world with over 500 million consumers; it’s no wonder so many businesses operate internationally with multiple offices based across Europe. Brexit will, without doubt cause an increase in international expansion with 42% of UK businesses already looking to extend overseas.


With international integration, however, comes linguistic variances. Becoming a multicity company entangles communication difficulties, the top 10 languages which include; English, French, German, Spanish, Russian, Italian, Arabic, Portuguese, mandarin and Dutch are widely spoken across Europe and require a high level of comprehension if business is to be done with their respective countries. In 2014, EU-owned firms recruited a total of 1.6million employees in the UK, working for EU companies in the UK will demand knowledge of a second language relative to the EU country they are originally based in. Shockingly, however, 75% of UK adults are unable to hold a conversation in any of the top ten languages.

43% of European companies have established their EHQ (European headquarters) in the UK, including over 100 of Europe’s 500 largest companies; this has been a catalyst for the requirement of multilingual candidates. 1,824 of these businesses are owned by Germany; unsurprising with German being the fourth most used language online and the language spoken in some of the most economically important countries. France isn’t far behind with 1,497 owned companies in the UK and the language most sought after by employers with a rate of 49%. Spanish, being the second most spoken language in the world is useful to 34% of businesses, especially those trading in the US.

With such a high demand for foreign languages in the corporate world, it is important when hiring to assure a high level of language ability, especially when 34% of candidates lie on their resume about their linguistic aptitude. Throughout businesses in the UK, the three languages most in demand are French, German and Spanish, yet only 22% of Londoners speak an additional main language.

Considering the favourable appeal of popular languages, 70% of companies value foreign language skills, these skills require a high level of proficiency, however, as a good level of multilingual communication is needed to build relationships with clients, customers and suppliers.

The UK has been recognised as Europe’s most desirable country to live in, and second most desirable globally to expand to by businesses. Reasons for this include access to new or existing clients, technological advancements to develop new products, a wider range of suppliers and partners, and a diverse talent pool as well as to simply create more cross-country business. With 24,145 UK based businesses owned by companies located overseas, it’s important to define your linguistic talent hiring strategy to secure the right multilingual candidates.

So, what can you do to find ‘la crème de la crème’?

With Brexit officially coming into effect on the 29th of March 2019, there will be certain practices that need to be implemented in order to recruit multilinguistic talent from overseas. Companies can help themselves and European employees through a few methods; if you are a European firm operating in the UK or simply want to fish in the international sea of talent, you could apply for work permits for your employees to make the transition easier for them, doing this will attract more quality candidates to your business and create reassurance in moving abroad.

If instead, you are a UK owned and based company looking to hire some international talent, it may be more beneficiary to move foreign language departments to cities in the EU, this way you are able to hire with more freedom without the effects of Brexit. Moving abroad can be frightening and difficult, especially after Brexit, so offering advice and support during this period will go a long way for your potential employees.

So where do you find multi-language proficient candidates? Job boards are a good place to start, 'Top language Jobs' in particular is the leading foreign language applicant portal in Europe with a high-demand of 2139 vacancies, particularly those involving translation and interpretation.

You could also opt for international recruitment agencies such as Euro London or Hudso; this way you can outsource scouting for quality candidates which can take up a lot of time and recourses. Another opion is through employee referrals, this is a good way to improve internal relationships, motivation and productivity.

Many businesses rely on the applicant’s word rather than evaluating the level of comprehensive, spoken and written level. It could be assessed personally, or with an interpreter, but this wouldn’t cover all aspects of linguistic ability and would take a long time if it did. With foreign-owned companies contributing an average of £333.7bn in gross value and language skills deficit costing the UK £48bn a year; being sure of the quality of your new lingual hire is essential.

So, how exactly is language aptitude measured, and what is the most efficient method? Traditionally, linguistic and comprehensive skills would be split up between phone call evaluations to assess the level of speaking and listening ability; combined this would take an avg. of 45mins, and in-person reading and writing tests would take another 45mins approx., with a further online listening, reading, speaking test that could take 90mins, all together that’s 3hours to test four skills; a lot of time for both candidate and employer.

The easySPEAKing language assessment tool, however, allows you to combine all the four skills assessments into one half-hour online test. Through a combination of video recording, pre-recorded audio listening, and writing, the test assesses the 4 main language skills; vocabulary aptitude, written expression, listening and reading comprehension.

Being able to assess conversational ability online is a new advancement in language assessment software, normally it would have to be done in person or over the phone, the randomly selected questions are also tailored to recruitment, so employers can really get a good perspective of conversational capability within a corporate dialog. easySPEAKing’s extensive linguistic evaluation tool puts all of your doubts at rest with expert language assessment of oral, audio and written comprehension.

So how does it work?

You begin by adding the applicant to your network and choosing the relevant language assessment you want them to take; there are 9 popular languages to choose from; these include 9 of the top 10 languages.

There will be a mix of oral, audio and written questions to be completed. The test begins with 5 randomly-generated questions to test oral expression, candidates will provide their responses through video recording for accuracy and consistency.

There will then be 8 audio multiple-choice questions to examine the level of listening comprehension, following this, the candidate will complete the final assessment; a 150-word written exercise to evaluate the level of written proficiency.

The recruiter and candidate will receive a report with an overall language comprehension score in adherence to the CEFR (Common European Framework of Reference). The report will also include a detailed breakdown of the candidate’s skills in relation to the independent evaluation tasks.

This short and flexible tool, provides recruiters with confidence and certainty when sourcing multilingual applicants, whether UK based or hiring overseas, as well as giving the candidate a better experience with an accurate, one-take test. When Brexit takes effect in a year’s time, it will be crucial to implement efficient tools throughout your recruitment process, especially when dealing with the scarcity of fluent multilingual talent in Europe. Advanced language assessment tools will help you find quality candidates in a competitive and growing multinational economy with a rising demand for foreign languages. 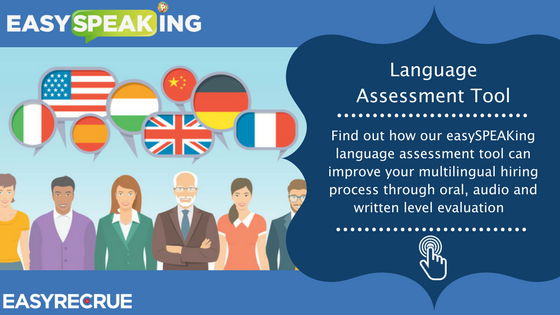 The 12 HR Tips of Christmas

Your guide to assessing talent digitally

What makes you select one candidate over another? Hiring is a...

How Santa delivers millions of presents one night a year so fast...

Our Talent Experience Platform optimizes the path of your talents, from their recruitment to their evolution in the company.